This is the last post here on Blogger. The new blog is located at sectorocho.com I think it is fitting that it should happen as President Trump leaves the Whitehouse for the last time. Let's join Colonel Bella, the director of Blog control under the new regime, to see that he is not happy about this:

Your entire blog can be moved for a small fee and placed on that server.
There is a one time cost for moving your entire blog.
There is an ongoing cost of maintaining the server. The cost for the server is $25 a month, paid quarterly. We can also give you an associated email address for an additional $5 a month, again paid quarterly.
If anyone is interested, drop me an email at divemedic@sectorocho.com. Put "won't be silenced" in the subject line.
I am editing this post to add the RSS feed address of the new home:
https://areaocho.com/?feed=rss2

Posted by Divemedic at 8:31 AM No comments:

What an incredible coincidence

Republican Senator Richard Burr refused to side with President Trump in challenging the election and joined the chorus of politicians who threw him under the bus. Two weeks later, the FBI announces that they are closing the investigation into the questionable stock market activity that made it appear like the Senator got rid of all of his stock, right after receiving a COVID briefing where he learned that the nation was about to be locked down. No charges filed.

We won't be silenced.

Smaller blogs like mine just don’t have the traffic to justify the expense of a dedicated server. So I have a solution. I have set up a virtual server that is outside of the USA and will not respond to cancel culture arm twisting. The expense is a bit high for a small blog, but my aim is to make it more affordable by splitting the cost.

Your entire blog can be moved for a small fee and placed on that server. The cost for the server is $25 a month, paid quarterly. If anyone is interested, drop me an email at divemedic@sectorocho.com. Put "won't be silenced" in the subject line.

In the middle of the night on Sunday, 2,000 National Guard Troops were sworn in as Deputy US Marshals, granting them police powers. 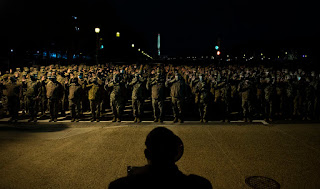 Isn't this EXACTLY why our founders feared a standing army? Don't call this a militia. They are wearing Federal Uniforms, carrying Federal Weapons, paid from Federal funds, and have all been vetted to ensure loyalty to the incoming President- not to the country, not to the Constitution, but to one man.
If that doesn't chill your blood, I don't know what will.
Posted by Divemedic at 6:59 AM 2 comments:

Where I disagree with Melania Trump

"focus on what unites us. To rise above what divides us. To always choose love over hatred, peace over violence, and others before yourself. Be passionate in everything you do, but always remember that violence is never the answer and will never be justified."

I wholeheartedly disagree. I always will heap scorn on stupid ideas like "violence is never the answer."

Sometimes, violence is the only answer.

In a system where one side is the aggressor, the intended victim has only one choice: Violent resistance, or submission leading to slavery and death.

Ask Stalin's victims how that worked out for them.

What if one side were imposing their will on the other, eating their sustenance and stealing their wealth for their own benefit?

The victims of this tyranny try to voice their opinion and are told they are wrong, then told to sit down and shut up. The victims next try to use the legal system, but are denied. Then some of them attempt to protest, but are called terrorists. They are told that anyone who would protest or resist will be made destitute, or perhaps shipped off to camps to be 'reeducated.'

Would violence be the answer then? Or should they meekly accept their fate? Perhaps she should remember the Romanovs before she disavows all violence.

Posted by Divemedic at 11:06 PM No comments:

A 22-year-old Virginia man, Guy Berry, was arrested while carrying a pistol, three high-powered magazines, and 37 rounds of ammunition near the U.S. Capitol on Sunday. This made him the third person to be arrested by police under increased security that weekend in response to the January 6 riot.

According to Laura Meckler of the Washington Post, Berry’s weapon – a Glock 22 – was visible in a holster; His aunt told the paper, “He’s one of those open-carry people,” adding, “I keep telling him that black men can’t walk around with guns on their hips, but he doesn’t believe me.”

Posted by Divemedic at 10:42 PM No comments:

Scene: Democrat Headquarters, discussing the election and the purge of from the Internet of those who question the results

Posted by Divemedic at 10:30 PM No comments:

The scene outside of Democratic headquarters. Or at least, that is what I think happened.

As I have been saying, there are big changes coming here at this blog. We will soon be moving to a new site that is safe from being cancelled. This post is a part of that. Stay tuned.

Are you the keymaster?

Here are the prison guards. Note that the guy in the middle has AR/M4 mags but no rifle. 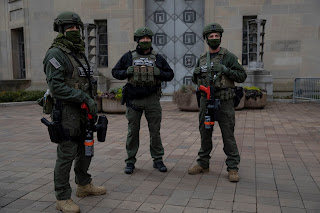 If he can find a guardsman, they can cause some problems together.

Nationwide security lockdown will be for an indefinite period of time.

Trump was the dictator, though.