This sign comes to us from Orlando Regional Medical Center: 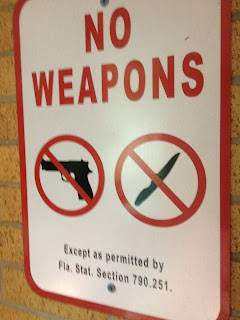 You will remember from this post that Florida Hospital also has signs up. Since nearly all of the hospitals in the Orlando area are either part of the ORMC or Florida Hospital chain, going to the hospital either means ignoring the sign or becoming an unarmed victim.
Posted by Divemedic at 1:22 PM No comments: 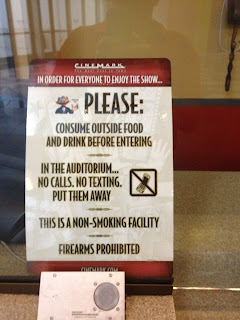 First, I don't understand how me having a concealed firearm interferes with anyone enjoying the show.

See, this theater doesn't care if a shooter comes in and kills you. They don't care if you get raped, robbed, or murdered in the parking lot. Even though their policy leaves you defenseless, and is a contributing cause of your death, they won't pay a dime in compensation to you. The reason is that the law doesn't hold them responsible for what the criminal does, even though the situation that allowed the criminal to do it was entirely of their creation.

One could argue that Cinemark has a moral obligation, but good luck with that.

For that reason, I noted that Florida law doesn't grant this sign the force of law, and carried there anyway. One could argue that I have a moral obligation to obey the sign, but good luck with that.

That is what all of my friends are saying. I bought a new 2013 Challenger RT. This car is fast, and a real joy to drive. I don't care if it IS a mid life crisis, I am enjoying the hell out of it. 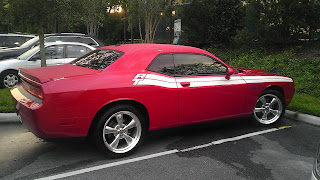 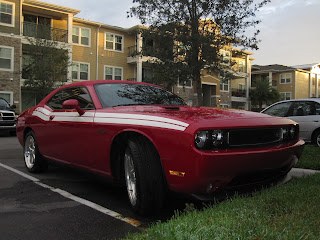 If you remember, I posted a few months back about a push to have a referendum on the ballot for voters to approve a law that would require Orange County employers offer sick leave to their employees. The law would require that an employer give employees one hour off with pay for each 37 hours the employee works. This will increase labor costs by at least three percent.

Of course, there were lawsuits. Unfortunately for the socialists, they sued the wrong person. By the time they got around to suing the correct one, it was too late to stop the ballots, which were already being printed.

The thinking astounds me. The proponents of the law say that "it's wrong for employees to be punished financially if they're too ill to come into work." but see no problem with punishing a business financially if the employee doesn't work.
Posted by Divemedic at 5:32 PM No comments:

Looks like the "Captain of a Crew of One" has had a bit of a mutiny, unless we are to believe that he has posted 46 posts today about cutting hair...
Posted by Divemedic at 9:42 PM No comments:

A firefighter is forced to resign for writing a Facebook post after a call where a 2-year-old was hit by a car, allegedly stating that the child was unattended and asking where the mother was.

How many times have we all wondered the same thing? It's a shame that a man has lost his job, and three others are facing discipline, while the irresponsible parent gets nothing for allowing this child to be out on the street to be injured.

Public safety agencies are so worried about this politically correct attitude, so afraid of ruffling feathers, that they  would rather hang employees out to dry than ask why a 2 year old was on the street unsupervised.

Yet another reason why I retired.
Posted by Divemedic at 3:59 PM 1 comment:

Medic Protip of the day: Sepsis in an infant causes intravascular volume depletion via increased capillary permeability and vasodilation. This is a form of distributive shock. The therapy of choice for pediatric patients with sepsis (as evidenced by tachycardia and increased capillary refill time in a febrile patient) is bolus doses of isotonic crystalloid or colloid fluids. This should be done until perfusion improves, or new onset rales develops. Dose is 10-20 ml/kg, titrated to heart rate, capillary refill, urinary output, and changes in level of consciousness.
Posted by Divemedic at 9:37 PM No comments: