Posted by Divemedic at 7:32 AM No comments:

Trooper Martin made himself famous by whoopin up on Paramedic White. Seen all over the world on Youtube, the investigation is complete. Oklahoma Crime Examiner Patricia Phillips has followed this case from the beginning, and you read all of the details in her column. Martin's suspension letter goes out of its way to justify the traffic stop and to lay blame on the paramedic, and excuses some of the extreme conduct of the trooper.

Ward advises Martin that it would have been more appropriate to have allowed the ambulance to continue to the hospital and conclude the traffic stop there.

Ward also points out, diplomatically, that Martin seemed to be spoiling for a fight.

"On at least one occasion, you withdrew from the altercation, only to place yourself in a position for a subsequent altercation with Mr. White.

Finally, your manner when approaching Mr. Franks, the driver of the ambulance, was unnecessary and unprofessional. Your demeanor and language at the scene was also unprofessional."

Ward then cites the OHP Operations Manual to characterize Martin's behavior as "conduct unbecoming an officer" and quotes statutes allowing for Martin to be "discharged, suspended without pay for not to exceed sixty (60) calendar days or demoted..."

Ward then states, "your conduct and disregard for the welfare of the patient justify severe discipline." And that "severe discipline" turns out to be ... five days suspension without pay and an anger assessment?

ANGER ASSESSMENT? A 5 day suspension? Anger assessment is a bullshit class that allows a supervisor to look like he is doing something when he wants to placate the public. I have seen medics get a heavier suspension for much less.

Remember that Martin has already been fired from two other police jobs for using excessive force. What this trooper did was nothing short of Aggravated battery. Had the medic defended himself against this unlawful use of force, he would be looking at a lengthy prison stay. If the video had not been made public by the bystanders, White would be in jail right now.

What happens when the next victim of your rage doesn't have video rolling? All I can say is that I am giving serious thought into installing video in my personal automobile that transmits the feed to a remote server (so tapes don't get "confiscated"), and if i should ever find myself in Oklahoma, I will be sure to do so. Perhaps the residents in your response area need to invest in some armor piercing ammo- that may be the only way to stop you once you embark on your next steroid fueled, department approved temper tantrum.

Perhaps White can sue you and your department. Good luck to him. I hope he takes your house.

But, hey- cops are so well trained that they are the only ones who can be trusted with guns, according to many.

Edited to add: If you want even more of the facts here, read the lawsuit that White filed against Martin.
Posted by Divemedic at 3:34 PM 1 comment:

I was looking at the public debt of the United States this morning, and I noticed that as of July 16th, we owe $11.598 trillion as a nation. On January 20, when Obama took office, we were $10.626 trillion in debt. That means that this week the President will have officially broken a record: It only took him 6 months to borrow a trillion dollars. All told, he has spent nearly $3 trillion.

That is right- it took this nation over 200 years to borrow a trillion dollars. Obama did it in only 6 months. To put that in perspective: Obama has spent nearly $12 million every minute that he has been president. For you visual people, here is a picture of $1 trillion worth of $100 bills (note the little guy in the lower left corner)

One trillion dollars (in $100 bills) if laid flat on the ground would be enough to pave a road 172 feet wide that stretches from the Earth to the moon.

The stimulus that Obama pushed for and then signed into law was enough money to pay off half of EVERY MORTGAGE in the country. A trillion dollars is enough to mail a check for over $3300 to every man, woman, and child in this country.

That is on top of our national debt, which now looks like this: 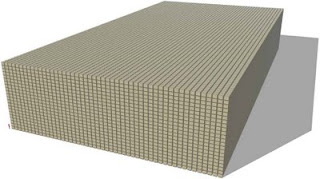 Not counting the weight of pallets, a stack of $100 the size of our National debt would weigh over 116,000 tons. That is more than a Nimitz Class Aircraft Carrier fully loaded with supplies, personnel, and aircraft.

Pictures courtesy of http://www.pagetutor.com/trillion/index.html
Posted by Divemedic at 6:17 AM No comments:

In a story from the Orlando Sentinel, it is reported that the National Law Center on Homelessness and Poverty has ranked Orlando as the third “meanest city” in the nation when it comes to the city's treatment of bums. The top ten cities were mostly in warmer climates where the homeless tend to congregate.

They stand on the corner and beg, urinating in public, breaking into vacant buildings, and commit crimes. They scare paying customers away from businesses, as well as sucking up resources in the city in their constant search for more drugs, alcohol, and free handouts. There are several homeless in my area that are known on sight by local hospitals, EMTs, and police. Several of them are transported to hospitals in the area more than 150 times a year, so they can go to the ER and get a free meal/more drugs/a place to sleep.

Contrary to what the press would like you to believe, most of the homeless are there because of drug or alcohol addiction- they are not just unlucky people who were laid off. They stand on the corner and beg until they get enough for some booze, and they are "off work" for the rest of the day.

The Brady Campaign wants you dead

A group of 50 teens attacks a man while he is on private property. The story makes some hay by pointing out that the teens were black. Let me start this by saying that I don't care what color you are. If you attack me in a place where I have a right to be, Florida Law says that I have a right to protect myself, and meet force with force, and that law includes the use of deadly force, if that force is needed to protect me or my family from a threat of serious injury.

The only question here is whether or not a crowd of 50 teens are powerful enough to cause serious injury to a 39 year old male. (OK, a 40-something in my case) It would appear that it does, being that the victim in this case spent several days in the ICU as a result of the attack. As we all should be aware, head injuries can easily be fatal. Even though, in this case the injuries did not kill the victim, the only reason they did not is because they got tired of beating him and left.

The Brady Campaign would rather see rampaging groups of teens roaming the countryside and beating up law abiding citizens, than see those same citizens defend themselves. According to them, a person is morally superior if he runs away, thus allowing a band of savages to beat his wife and children, rather than committing the unpardonable sin of defending himself.

Well, let me tell you: I ain't goin' out like that. You are perfectly safe from me and my weapons, unless you and 49 of your friends attack me in my neighbor's yard, or the gas station. Likewise, avoid trying to rob me, or beat me with a tire iron. For if you bring violence, I will respond with lethal force, because I am not going to lie there and hope my life will be spared because you become bored with beating me.
Posted by Divemedic at 8:05 PM 1 comment:

The pope has come out against greed, and is stating how we should be more giving, and not so materialistic. He states that we should give away what we have to the poor.

This is odd, coming from the richest man in the world. The Vatican is filled with priceless works of art, and the church owns billions of dollars in gold alone. Charity starts at home, buddy.
Posted by Divemedic at 6:50 PM 2 comments:

A married couple were seen at Disney yesterday. It is rumored that the pair was armed with concealed handguns. Absolutely nothing else happened concerning the pair. No one was hurt. That is all.

Disney security was none the wiser.
Posted by Divemedic at 6:49 AM No comments: