On July 4, 2002, I was on my way home from work when my pickup truck was rear ended. The car was incapable of driving away, there was transmission fluid on the ground. The man who was driving the car did not have a driver's license, nor any other form of I.D.. He was cited for no license and no proof of insurance. He never showed up to court, because he was an illegal immigrant. I never saw or heard from him again.

The damage to my vehicle was over $1200. I have a $1000 deductible and uninsured motorist coverage, so the ordeal cost me $1000. I was not alone. As a firemedic, I was present while this exact story played out several times a month.

So it came as no surprise when I read that an illegal immigrant hit and killed a woman's unborn baby before fleeing from the scene. He was caught. The only upside to this story is that he did it in Sheriff Grady Judd's jurisdiction. There are many things that happen under Judd's watch that I disagree with. This is not one of them. The illegal will not be released under some BS sanctuary law.

I would say though that I do not think he should go to jail for the death. Sure, leaving the scene of an accident, driving without a license, but not the death. After all, there are many women who claim that the fetus is not a baby, but a choice. A useless, parasitic piece of tissue. How the courts can reconcile the fact that they simultaneously call the fetus a baby and a choice is beyond me. How can it be legal for the mother to kill this baby, but illegal for Cervin-Gomez to do the same?
Posted by Divemedic at 5:30 AM No comments:

Articles claim that Miami has the lowest homicide rate since 1967, with only 51 murders in 2018 and 59 in 2017. The article claims a 16 percent drop in homicides county wide.

At the same time, FDLE claims that there were 188 homicides in Miami-Dade county in 2017.

We are being told that violent crime is on the rise, but then see conflicting numbers. Are there games being played with the numbers, or am I missing something?
Posted by Divemedic at 5:30 AM 2 comments:

Not understanding the issue

This post began as a comment over at gunfree zone, but got long enough that I decided to make a post out of it.
The thought among Democrats is that they are going to make guns illegal. Let's say that you manage to circumvent or repeal the Second Amendment and then pass your dream wish list of gun control laws. All guns are now illegal. Now what?

SWAT is going to go door to door and take them? How is that working out in Washington state?

So you manage to find enough cops that will go door to door and take them. Guys like these: 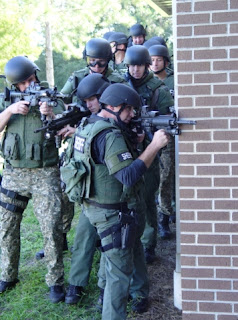 I suppose that those guys look pretty scary and impressive, if you don't know anything about guns or military tactics. Bunching up like that only works in an environment where there is only one threat, and you know where it is.

You know what that looks like to me? An ambush target. Someone in the police department, even a clerk, gets wind of a raid and makes a call. The guy they are there to see? He is waiting across the street with a handful of his friends, watching these idiots. A mad minute from as few as three guys with decent rifles, and your SWAT team is toast. The next raid will have a harder time finding volunteers. There are over 100 million firearms owners in this country.

If I have learned anything from watching the wars in the mideast and in Vietnam, it is this:
The US military cannot be beaten in battle.
The US itself CAN be beaten with a change in tactics:
Every soldier depends on a long logistics chain that delivers the widgets needed for the machinery of war: everything from diodes found in an F35's avionics, to bullets, and even fuel for vehicles. Attacking the US military through challenges to logistics, a military art that the US army practically invented, is difficult if you are a foreign belligerant, because our logistical base is protected by an ocean with SLOCs guarded by the strongest navy in the world.

The answer to defeating the US as a nation lies not in fighting the military. That isn't a winning strategy. Instead, defeating the military involves attacking unguarded supply lines. A tank without fuel is a pillbox. A jet fighter without parts to repair its avionics is a static display.

So the military expends forces to guard supply convoys. The civilian militia knocks down power lines. Now forces are needed to patrol the power infrastructure. Then the rail lines that bring raw materials to the factories are sabotaged. Then factory workers. Military families are attacked while soldiers are away guarding convoys.

A civil war is always brutal and bloody. One thing that the British discovered in 1776 was that militia forces don't follow the rules that armies do. Those cowardly colonial militias didn't fight fair. They deliberately targeted officers, they hid instead of standing in the open. The militias were composed of veterans who learned lessons by fighting in the indian wars. The militias today are made up largely of veterans who learned lessons on asymmetrical warfare from our current conflicts.

Those on the left who are advocating for this think that such a war would only be fought by the military. The ones dying will be only the people they despise: the military and the gun owning right. They don't realize that such a fight would be fought in their own backyards, their own gated neighborhoods.
Posted by Divemedic at 5:30 AM 4 comments:

Armed troops to deploy against guns?

Democrats are asking Governor Desantis to deploy the national guard in Jacksonville to curb gun violence. They are also asking troops enforce a curfew of 11 pm for all people under 18.

Why do so many socialist ideas end with armed troops being used against their own citizens?
Posted by Divemedic at 5:30 AM 2 comments:

A Tampa man reported an income of $18K and claimed that $1 million was deducted from his paychecks, so the IRS sent him a refund check of $980,000.

I once got audited because I accidentally failed to report $7 in interest from an account I forgot I had.
Posted by Divemedic at 8:53 PM No comments:

The left has been passing laws for years that fly in the face of Federal law: marijuana laws and sanctuaries for illegal immigrants. Now that there are local sheriffs that are refusing to enforce gun control laws, all of a sudden sanctuary laws aren't legal.

Rep. Daymon Ely, D-Bernalillo and Sandoval Counties says counties and sheriffs can't just decide to ignore a state law.
"It's a very dangerous thing to start talking about we're only going to enforce certain laws that we like and others that we don't. Our system does not work that way," Ely said.

What is the funniest about this, is that Daymon Ely sponsored Senate Bill 196, which is sanctuary state legislation, which if adopted into law, state and local law enforcement officers would not be able to apprehend illegals in the state solely because they are suspected of breaking federal immigration law.

Liar.
Posted by Divemedic at 8:41 PM No comments:

A cop responding to a 911 call sees a man running down the sidewalk with what the cop said was an unknown black object in his had, and without saying a word, fires 5 shots through his windshield, striking the man. It turns out the object was the man's cell phone, and the man was approaching the cop car because the dispatcher told him to.

The police investigated themselves and found that they had done nothing wrong. If a private citizen had done the same, he would be in jail right now.

For goodness sake, you should never call the cops, or be near a cop with anything in your hand. They might kill you.
Posted by Divemedic at 7:13 PM No comments:

It's easy to blast pensions, unless you realize where they came from. In the late 1980's and early 1990's, the economy was booming. In good economic times, people leave public employment to seek employment in the private sector, which has better pay. That is exactly what happened. The public sector was being bled of talented employees, who were leaving government employ for the greener pastures of the private sector.

For example, as a firefighter paramedic, I could have gone to a bridge program, transitioned from paramedic to nurse, and gotten a 40-50% increase in my pay while working fewer hours (Firefighter medics work a 56 hour week, nurses a 36 hour week). I stayed for the pension.

The powers that be were busy wasting the newfound largess of tax receipts from the booming economy on governmental baubles that were designed to win votes, and therefore could not afford to raise employee pay enough to stop the bleeding of talent. So instead, they instituted a pay later approach- they started a pension system. The promise of a good retirement kept many workers in government employ. The government had the best of both worlds- buy good employees now, pay for them later.

Now here we are, 20-30 years later, and the bill is due. Now instead of paying the bill, the government cries poor and refuses to pay the employees who stayed the benefits they were promised. The government is perfectly capable of paying, but like a consumer who had a big party on their VISA card, they would rather keep spending it on wasteful projects than repay the debt that they incurred.

Don't blame the public employees. They worked as asked, fulfilling their end of the bargain. Now that they expect the government to hold up their end and pay what they owe, the government decides that they don't want to pay, because they have other things they would rather spend the money on.
Posted by Divemedic at 8:59 PM 1 comment: 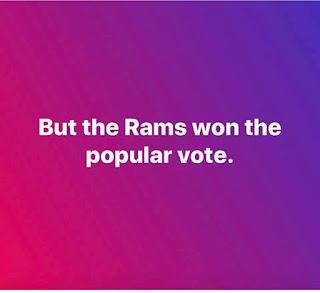 Posted by Divemedic at 9:22 PM No comments:

The government has released the national health security strategy report and is claiming that hurricanes are more severe and frequent (pdf warning) because of global warming. Are they really? If you look at this chart, it certainly seems like it. 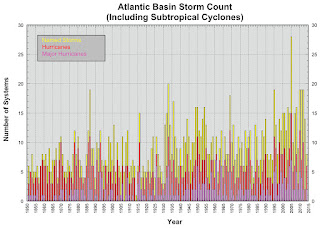 There is an obvious flaw: before 1974 there were no weather satellites. Yes. TIROS launched in 1960, but it only orbited for 78 days and only had a black and white camera. Even then, the earlier versions of the GOES satellite program, which began in 1974, only viewed the earth about 10% of the time and were not able to measure storm strength (by cloud top temperature) until GOES 9 in 1994.

Weather records for hurricane strength depended entirely on direct observation of the weather from ships and land stations until the 1955 hurricane season, when regular hurricane hunter flights began.

This means that the data on storm frequency and strength cannot be as accurate as today for any hurricane season before about 1995. The data just wasn't there.

Posted by Divemedic at 6:00 AM No comments: 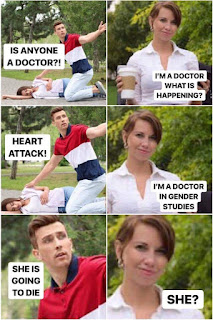 Posted by Divemedic at 3:39 PM No comments: