Where the money goes.

meaning that over $1,778 Billion, (or 67%) of the total outlays was for wealth redistribution efforts.

$212 billion went to pay interest on our staggering National debt.

The source of the $2.407 in tax money the government took in?
$1708 Billion of it was in payroll taxes
$313 billion from corporate taxes
$217 billion was borrowed
$168 billion was from all other taxes

What does all of this mean?
If giveaway programs were eliminated, the United States government could operate with the payroll taxes eliminated and replaced by a 5% sales tax. That would cost you less than what social security currently does.

Fat chance getting the people weaned off the government handout, though.
Posted by Divemedic at 9:29 PM No comments:

Your Vagina may not be a clown car 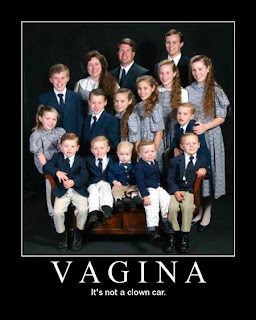 but it may just be a cash register. The same government that spends $337 billion more than it takes in every year is giving money away to stimulate the economy, to the tune of another $170 billion. The plan is to pay people $600 each, plus $300 for each child. People who make more than a certain amount (in other words, those who actually succeed in life) will not receive the money. Instead, those that produce nothing but children get the big payola.

That means that a woman who has been sitting at home on welfare and using her vagina to bust out six kids with three different dads will get $2400, while I support her illegitimate children through the welfare system, all because she does not know how to keep her legs closed.


Where will they get it? Well, they either will borrow more money or print more money. Either solution is another bread and circuses decision that brings this country closer to economic ruin. How do you stimulate an economy by taxing it, and then putting that money back in the economy? That is like trying to make a rope longer by cutting off one end, and tying the cut off piece to the other end.

Stupid vote buying effort that will only get idiots to vote for you. Unfortunately, that seems to be the majority of the electorate.
Posted by Divemedic at 7:17 PM No comments:

There are few things that illustrate the libertarian viewpoint more vividly than the current mortgage crisis. Thousands of home buyers buying homes that they cannot afford, and then the bank being surprised when they stop paying for them. I cannot say that the entire mess has been a surprise, with what I have seen over the past few years.
This brings us to the viewpoints of the various political camps in this country:

Liberal: The liberal viewpoint blames the lender. After all, if the lender made the loan to a person who could not afford it, even though they knew it, it is their own fault. Those evil corporations have been turning a profit off the little guys for years. The predatory lenders are now getting their comeuppance. The government should step in and protect the little guy by fixing interest rates, and finding other ways to let the little guy keep his house.

Conservative: The people who borrowed money that they could not afford are to blame here. After all, they signed on the dotted line, so why should the investors suffer? They loaned the money out with the expectation that they would be repaid, so the borrower should repay it. The government should step in and protect the assets of the lenders and their investors by making bankruptcy harder, and perhaps infusing some cash into the lenders as assistance. After all, if the banks go, so does the economy.

libertarian: The lenders and the consumers both entered into a contract. They both had opportunity to decide for themselves whether or not it was a good idea to participate. If the borrower defaults because the lender allowed him to overextend himself with an adjustable rate, interest only balloon payment that they knew could not be repaid, so be it. If the lender loaned money that they knew the borrower did not have the means to repay without resorting to financial gymnastics, so be it. The government should stay out of it, because it is not my fault that the parties involved were greedy, and were trying to trick the system. One way or the other, this will fix itself.

In the long run, the government screws up everything it touches. It is better if they stay out of it and stop trying to generate wealth through taxation, which reminds me of a man trying to lift himself off of the ground by standing in a bucket and pulling feverishly on the handle.
Posted by Divemedic at 2:15 PM 1 comment:

Alot is being made about this story. I cannot speak for the police side of things, but I can give some insight into how paramedics do business, especially in my neck of the woods.

Patient consent seems like a pretty easy subject when we are in school as a parafetus. In fact, many programs gloss over the subject, but in my experience no single issue gets medics in trouble as often as the subject of consent and refusals. What complicates things further is when a patient is forced to go to the hospital against his will, or a child has to go over the objections of a parent.

In order to explain how this happens, a little explanation about consent and mental capacity is in order. In order for patient care to happen, the patient must consent to this care. The law allows a medic to care for a person who for some reason is incapable of making an informed decision for themselves. Examples include unconscious or intoxicated adults, and children in the absence of their parent or guardian. This is called "implied consent."

In the case of a child with a parent in attendance, this can get even stickier. Even though the parent has the right to refuse, the paramedic is still obligated to report the injury to the authorities if he feels that the life or welfare of the child is in danger. In this case, according to the article, the medic had plenty of clues to lead him down that path:

1 The mechanism of injury: The child was drug by a moving car
2 Facial trauma, "a black eye and visible bruising," facial edema, and a dilated pupil
3 The only way to rule out a brain injury is to do a head CT. This cannot be done in the field, so referring him for more treatment was appropriate.

The social workers saw the same thing, and offered to pay for the treatment. The father refused, and when they told him they could get a court order, he replied that they would need to "bring an army." So, the workers reported their findings to the Judge.

The judge, believing that the probable cause was there, issued a warrant and court order. The deputies attempted to enforce the order, and the father again refused. So, the Deputies enforced the warrant.

The child was evaluated, treated, and released.

The entire thing was properly done, in my opinion. The paramedics reported possible child neglect to child services. Child services attempted to handle it. Warrant obtained, after a judge found probable cause. Father resisted, warrant served. What did the father think would happen? The cops would just go away and discard the warrant, while saying "Oh well, we tried."

What would people be saying had the medics and social workers NOT done what they did, and the child had died? This happens all the time, and when it does, the DCF workers and medics get into hot water for it. Damned if you do, and damned if you don't. At least if I act, I don't have a dead child on my conscience.

and until you have held a dead child in your arms, you can't possibly tell me what that is like.
Posted by Divemedic at 12:51 PM No comments: