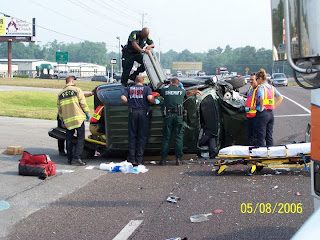 How many safety issues can you spot in this picture? This picture was posted on the internet by some responders who though it made them look "cool." It was reposted by another responder as an example of what not to do. The response to this was defensive and immediate. People from the offending department circled the wagons, and began demanding the picture and comments be removed. Then it got nasty:

I responded that the comments there sounded like a threat. The response?

So the message I get from this is that we would rather punish and threaten people who point out the mistakes instead of correcting them. Safety is everyone's responsibility, and if we ignore it so as not to make waves, we will never improve. That is how people get hurt.
Posted by Divemedic at 11:22 AM

Most people do not usually think about personal care, safety, and security items.