Have they begin the attempted coup?

Hitler had the Brownshirts (Sturmabteilung) during his rise to power: 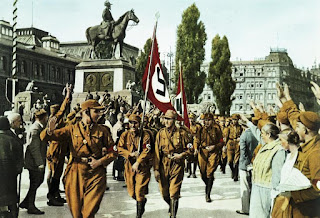 Mussolini had the Blackshirts (Milizia Volontaria per la Sicurezza Nazionale) to assist in his rise to power: 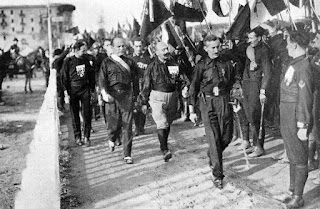 Now we see this: 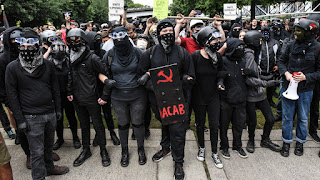 The current troubles and riots are part of a well organized and well supplied campaign. There are over 20,000 National Guard Troops that have been activated.

The rioting is much worse than anything I have seen before, even the Rodney King riots weren't this bad. As near as I can tell, the last time there was nationwide rioting on this scale was in 1968. Has the Socialist uprising gone from cold to hot?

Posted by Divemedic at 1:05 PM

This's scary. As in what is happening was planned JUST like Iraq.
So, My Point: The way things are going here in the states right now is just like what I personally witnessed in Iraq at the beginning of the breakdown. At least here we don't have to contend with (as of now) a loss of power and potable water. IF we were in fact to start to have those issues on top of the problems I saw over in Baghdad, then we be fucked. Similarities are as follows:

THEM_(IRAQ)______________
1) Sectarian Based Strife: Shiite versus Sunni, Shia pissed off Sunni had been running the show, keeping them down and oppressing them
2) Massive Discontent with long term lockdowns (due to US dot mil Air Force bombing)
3) Massive unemployment. The idiots fired ALL the dot mil and cops during the De-Baathification process, leaving -no one- in charge
4) Massive amounts of criminality as Prisoners in jail were released by Saddam to fuck with US Forces. Instead they went hog wild on the general population
5) Massive discontent due to food scarcity and inflation
6) Large numbers of 'outsiders' (foreign fighters) coming in to stir shit up for fun and profit.

CURRENTLY (US)
1) Race Based Strife: Black versus White, Black pissed off Whites have been running the show, keeping them down and oppressing them
2) Massive Discontent with long term lockdowns (due to CoronaChan)
3) Massive unemployment. The idiot Governors have kept businesses shut down based on bogus science and false narratives about the lethality of the bug
4) Massive amounts of criminality as Prisoners in jail were released by Governors to 'protect them' from a bug with a .06% death rate. They've been going hog wild on the general population
5) Massive discontent due to food scarcity and inflation
6) Large numbers of 'outsiders' (AntiFa from out-of-State) coming in to stir shit up for fun and profit.

Sweet fucking God in Heaven. This was AIPACs plan instituted in Iraq, and now, apparently someone is using the SAME EXACT PLAYBOOK HERE IN THE STATES.

Feel free to re-use, re-blog, re-post etc. etc. etc.
This's for real scary. Like I didn't realize just how exact the re-play is. The only thing I didn't add onto this here was the lack of clean water and power, but IF these assholes are, in fact, using the same exact playbook, thats what we'll be seeing in the next 60-90 days.

Because if shit don't change, thats all it took for Baghdad, the New York City of Iraq (ultra modern and up-to-date) to turn into Beirut circa 1980-81.