Here is the latest data for new COVID infections and deaths from the last 30 days. 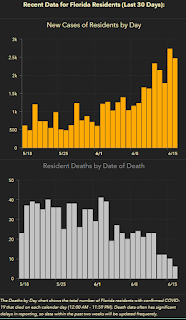 All this chart proves is that the people with less severe symptoms, and those without symptoms are more likely to survive.

It appears that we were all (including medical personnel) bamboozled into thinking this illness was more serious than it was. I will admit it. I was fooled. My apologies to anyone that I wronged in my ignorance.

The skimpy data we were being handed at the beginning made it hard to see how things would trend.

The press is focused on the number of confirmed cases for a couple of reasons. The big reason is the political, but it's a side effect of the other reason: it's all they know how to measure.

It's easy to count the number of people who are infected, compared to things like those who died at home, afraid to go to the ER because of the virus. I've read an oncologist saying the number of new cases being diagnosed is down as people don't go to the doctor. Which means more people will be diagnosed with later stage cancers and will almost inevitably be more likely to die. Heck, it's relatively easy to count the increase in the number of suicides from the lockdowns and they won't even report on that.

When all you have is a hammer, every problem...

The #NeverDeSantis cadre is explaining the descent in deaths as number manipulation to make the governor and the president look good. When asked why that data is not trustworthy but the new cases is, they tend to block you real fast.

Other have suggested that they are statistically hiding the bodies with the Flu deaths and that we are missing 4,000 minimum. Pressed for the data they also go mute