Apparently, Disney World in Orlando has dogs working in the security department. 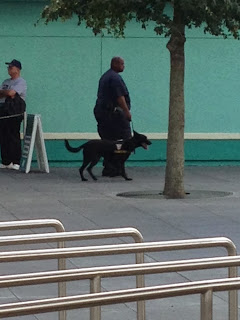 Disney has its own security department, which is supplemented by Orange County Sheriff's Deputies. In this case, the handler is not in the OCSO uniform, but is instead wearing Navy Blue BDU pants, a navy blue dress shirt, and is unarmed, meaning that this is a security guard. I must, however, admit that this looks nothing like Disney Security's regular uniform.
Posted by Divemedic at 2:50 PM

When we were there in October, we watched them run a dog thru the monorail before allowing boarding. We were at Epcot, and could see into the other train. It was a quick, car to car search.

I'm pretty sure the handler was dressed similarly, but was much more "fit".