and I want to reply to him, but this is going to be long enough that it will require its own post, so here goes:

Drugs like Heroin, cocaine, and morphine used to be available over the counter. By the late nineteenth century, countries such as Britain and Germany had enacted pharmacy laws to control dangerous drugs, but under the US Constitution, individual states were responsible for medical regulation. Late in the century some state laws required morphine or cocaine to be prescribed by physician, but drugs could still be obtained from bordering states with laxer regulation.

There were many "tonics" and other products that could be bought over the counter, and contained strong drugs. Bayer marketed and sold a heroin based syrup. It was frequently used to soothe a teething baby's gums. Coca Cola had cocaine as its active ingredient. Aspirin was also invented and widely marketed in those days. Had the same processes been in effect then as today, Aspirin would never have seen the light of day. 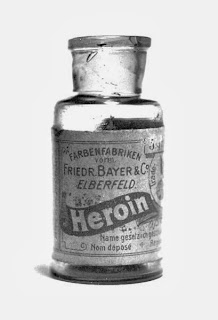 In 1914 President Woodrow Wilson signed the Harrison Narcotic Act, which exploited the federal government’s power to tax as a mechanism for finally enabling federal regulation of medical transactions in opium derivatives or cocaine. The main impetus for national drug laws in the US was diplomatic. As today, China was seen as the greatest emerging market, to which the Americans sought improved access. To help the massive Chinese opium problems, the US had led an international campaign culminating in the Hague Opium Convention of 1912, which required signatories to enact domestic legislation controlling opium trade.

During the early 1920s a number of New York addicts supported themselves by collecting scrap metal from industrial dumps, so earning the label ‘junkies’. Heroin addiction was blamed for a number of the 260 murders that occurred in 1922 in New York (which compared with seventeen in London). These concerns led the US Congress to ban all domestic manufacture of heroin in 1924. Two years later, however, US Narcotic Inspector S.L. Rakusin declared that heroin seemed ‘more plentiful than it ever was before’.

Just like the laws of today, the government used its taxing power to get the nose of the camel into the tent. Also like today, they used the difference in murder rates between US cities and London to blame an inanimate object, to facilitate the outlawing of that object.

Now, I will grant you that addiction was a problem. During this period,about 1 in every 304 people was addicted to one of these drugs. According to the National Institute on Drug Abuse, the rate of addiction of heroin is now 1: 97,000.  That isn't due to heroin being any less available, just less popular due to availability of better drugs. The rate of addiction of all illicit drugs today is much higher. One in 13 people has used an illicit drug in the past month, 1 in 70 if marijuana is not counted. One in 125 Americans has used cocaine in the past month.

So you see, drugs are more of a problem today, now that they are regulated, than they were when you could buy them over the counter. Along with that, we have other problems:
The police raids, asset forfeiture, and intensely high incarceration of people for drug offenses. The abuses of police power that go with it, and the monetary costs to society.
Street gangs and other criminal enterprises are deriving much of their money from the sale and smuggling of illicit drugs. The fact that these drugs are illegal is what drives much of the profits.

The war on drugs is a complete failure. The number of people taking and using drugs is higher now than when they could be bought over the counter, and there was no such thing as prescription only drugs. The number of people in this country that are in prison, being murdered because of the illicit trading of drugs, and property and lives lost to the police, not to mention our lost liberties, has skyrocketed to the point where we are almost living in a police state.
Posted by Divemedic at 8:35 AM