Our situation summed up in one story

Maybe I'm just drinking the conservative Kool Aid, but a close friend of mine who makes money from the financial industry, but not mortgages, explained it all to me. In addition I read up on it.

It started during the Carter Administration, but has gotten worse with each one since. Not only were banks and mortgage companies told that the government would make good on their losses, people like the excrable Barney Frank and Chris Dodd told the lending institutions they'd be labeled as racist if they didn't lend money to minorities who almost certainly couldn't pay it back.

As I said, there is plenty of blame to go around, but it's the politicians, not the banks that deserve the most blame.

Now this post is not a flame, I am just hoping that I can convince those of you who feel the same way that you are being deceived. Here is my proof: 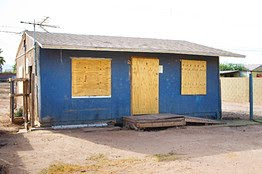 This home right here, a 576 square foot home with 2 bedrooms and one bath, was used as collateral for a $103,000 loan, according to the Wall Street Journal. Less than two years ago, Integrity Funding LLC gave a $103,000 mortgage to the owner, Marvene Halterman, an unemployed woman with a long list of creditors and, by her own account, a long history of drug and alcohol abuse. At one time, Ms. Halterman says, 23 people were living in the tiny house or various ramshackle outbuildings. Ms. Halterman hasn't had a job for about 13 years, she says. She receives about $3,000 a month from welfare programs, food stamps and disability payments related to a back injury.

Now the Republican talking point states that the banks are not to blame, because they were FORCED to loan to minorities by the Democrats. Here is a picture of Ms. Halterman: 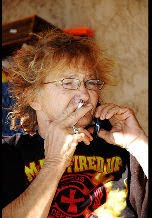 Oops. Not a minority. The motive here was not complying with some rule about minority lending, it was about money. The lending company was owned by Barry Rybicki, 37, a former loan officer who started it in 2003. Of the boom years, he says: "If you had a pulse, you were getting a loan."

When an Integrity telemarketer called Ms. Halterman in 2006, she was cash-strapped, owing $36,605 on a home-equity loan. The firm helped her get a $75,500 credit line from another lender.
Ms. Halterman used it to pay off her pickup, among other things. But soon she was struggling again.
In early 2007, she asked Integrity for help, Mr. Rybicki's records show. This time, Integrity itself provided a $103,000, 30-year mortgage. It had an adjustable rate that started at 9.25% and was capped at 15.25%, according to loan documents.
It was one of 197 loans Integrity originated in 2007, totaling almost $47 million.

Now picture this, Integrity made a $103,000 loan, and collected $9,243 in fees, and only loaned the money to her for a few days, selling the loan before the first payment was even due. That is exactly what I said was going on, in my series of posts on the lending crisis. The payments on this loan were $881 a month, for a woman who only had an income of $3,000 a month in disability, welfare, and food stamp payments and had not held a job in over 13 years.

The home was valued at $132,000 by the appraiser, even though there is no record of similar homes in the area selling for that price. What makes this case so typical of all this subprime garbage are all the fees that were made by people who had no stake in it: The appraiser made money, then Integrity made money, and Wells Fargo made more when it was sold to HSBC, which also took a cut before dumping it on investors in mortgage backed securities that were inexplicably rated AAA by rating agencies that were somewhere between crooked and incompetent.

Actually, the piece perfectly illustrates the greedy, deceitful practices that has since brought our economy to its knees. It's a great piece of reporting.

Sure, it is easy to lay all of this at the feet  of the borrower, but you would be dishonest in not pointing a few fingers at the lenders who should have known better, but were instead blinded by greed and profit. Three different lenders loaned her money on the "equity" of this nearly worthless home: The first for $36,000, then one for $75,500 to pay off the first, and then another for $103,000 to pay off the second. Each time, she got money at closing, and the lender passed the loan off on investors.

THANK YOU for posting this! I really like your blog!!