When arriving at work this morning, I found this in my mailbox: 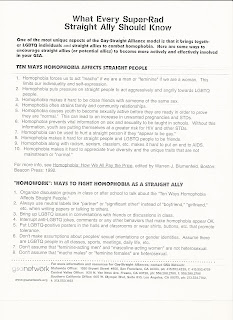 I want to you take a close look at what the schools want teachers to do:

Here is my feeling on this:
- I teach chemistry. Promoting homosexuality is not a part of my course content. I won't do it. I am not going to tell underaged teen boys that it is acceptable to suck dick, or underage teen girls that they should be out there licking pussy. I am just not going to do it.

- From a biological standpoint, if homosexuality were to become the norm, our species would cease to exist, as it interferes with reproduction. This by definition makes homosexuality a behavioral disorder. That isn't to say that people who are homosexual should be mistreated or bullied in any way, nor forced into treatment, but I don't feel that it needs to be celebrated or promoted any more than does flatulence, halitosis, or coronary heart disease.

However, professing the above beliefs and opinions would get me terminated if it were to become known amongst my coworkers. Free speech, my ass.

Posted by Divemedic at 8:04 PM

Might not be your thing, but the book The Forever War, by Joe Haldeman, has some unique paralles to this mandatory thinking.