This week, I have been giving mid term exams. My test in Biology has 80 questions: ten true/false, and seventy multiple choice. There are four versions of the test, so that the kids who sit next to each other cannot cheat of the tests of their neighbors. Two of the tests begin with the true/false section, and the other two end with it. 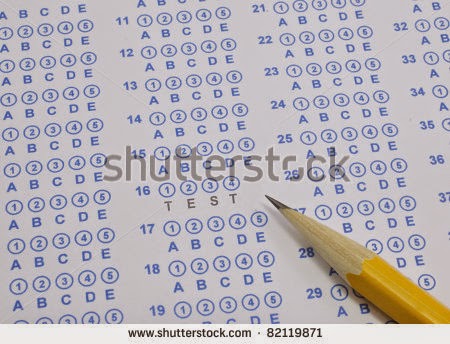 The test is done on Scantron sheets. The very fist question on each sheet says "KEY ID" and the students are supposed to mark which version of the test they have. One student did not do so, meaning that the test will now have to be graded by hand. In trying to figure out which answer key to use, I look at the test to see if the student's test began or ended with the true/false. The true/false questions are answered by filling in the first or second bubble, respectively, so any of the first ten questions that are answered by filling in a 'C' or a 'D' are not true/false.

The problem? NONE of the student's tests appear to have any true/false answers. This indicates to me that the student didn't even attempt to take the exam.

This is one of the reasons that education fails in this nation: The students don't want to be educated.

You can lead a child to knowledge, but you can't make him think.
Posted by Divemedic at 5:56 AM

This is one of the reasons that education fails in this nation: The students don't want to be educated.

Bingo! To the extend they care, they only care if it's on the test. How many times do you get asked, "is this going to be on the test?" It's like they're doing the rest of us a favor by going to school.

An engineer I used to work with has a daughter who went on mission trip to Uganda for a year. The attitude of not wanting to be educated doesn't exist over there. These kids will drag themselves to the one room school house no matter what. They almost always own just one set of school clothes which they jealously treasure.