Florida Hospital is a large chain of hospitals located in Florida. In fact, with 22 campuses located throughout the state, it is the largest chain of hospitals in Florida. A non-profit hospital, it is operated by the Seventh Day Adventist church. There are many things that the hospital prohibits on their campus, such as pork products. They are so strict, that the lease for the portion of land that is leased to Wendy's  prohibits the restaurant from serving bacon or ham.

Every one of the hospitals is posted with the following sign: 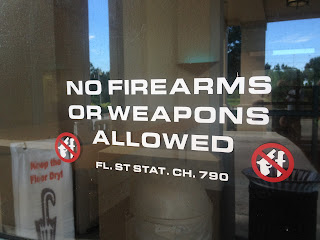 The sign is misleading. Chapter 790 only prohibits weapons and firearms in a pharmacy, and even so, law enforcement and those licensed to carry concealed weapons are exempt. Since you are prohibited from carry firearms unless you fall into either of those categories, that particular law is redundant. There are no laws prohibiting a person with a concealed weapons permit from carrying a weapon in a hospital, nor do signs carry the force of law in this state.

Even so, the law prohibiting weapons in a pharmacy does not extend to the entire hospital, just to the portion of the hospital that is the pharmacy. This sign is deliberately misleading, which indicates to me that the SDA church is being less than honest when it comes to this signage.

I ignore the sign and enter with my weapon anyway.

I almost hate to admit it, but when a business has a sign like this posted I've always carried my firearm in anyways. I'd rather be convicted of whatever charge the state can come up with rather than being another statistic.

As I understand that statute (on no firearms signs) if they see your weapon they may ask you leave. At that point you'd better leave, because if you don't it becomes "armed trespass", which is serious. Not to mention situations like Erik Scott in Las Vegas where he was killed by the police responding to an "armed man in the store" call from some security twit. May as well say he was executed by the cops because he didn't obey the conflicting orders.

Over here on the east coast, the local hospital has one of those signs. When my wife had her second hip replaced, and I was spending a lot of time in/around oddball visiting hours I walked up to see that sign. I chickened out and left my gun locked in my car. If I got locked up, I wouldn't be there to do the things the medical situation required.

By the way, Mrs. Graybeard points out that 790.145, about prohibiting possession of a concealed firearm in a pharmacy, says it does not apply to us:

(2) The provisions of this section do not apply:

(c) To any person licensed to carry a concealed weapon.

The post points that out, which is one of the reasons that I believe the sign is deliberately misleading.