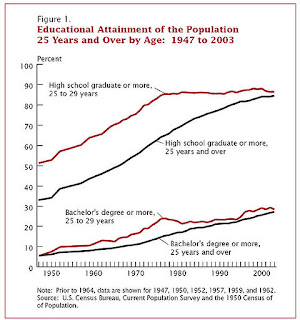 So the latest generation is flush with college degrees that mean little, because many schools are offering degrees in things that are not needed job skills. Because we have all of these degrees, we are demanding high wages, and this has driven the blue collar jobs out of the country. Unemployment is rampant. At the same time, we are paying people the equivalent of $10 an hour to sit at home for up to two years, so there is little to no incentive for work.
Instead of making things like cars and appliances, we sit around and make war and college graduates with degrees in French Poetry and Women's Studies. We spend money like there is no limit, and for that we are doomed. Soon, we will reach the nation's credit limit, and our time as the world's superpower will be over. I find myself wondering how hard the times that are coming will be.
Posted by Divemedic at 10:07 AM