I read this news story yesterday, the comments of one reader named "Los Angeleno" made me think about how the press can influence the thoughts of the reader without seeming to, simply by using psychological factors that the reader is not even aware of:

The Obama branding has been masterful. But the media won’t catch on becuase they are part of it. Notice that virtually every photograph of Obama was taken from the “heroic” angel: an upward looking angle that can’t help but cast the subject in a demi-god like position. McCain, on the other hand, was photographed from straight ahead angles. A subtle difference, but if you look, you will see that most pictures of The One really make him look like, well, The One.

Take, for example, the picture of President Obama that was released this morning: 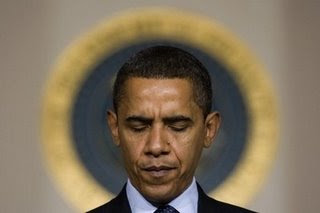 and then compare that to a stock photo of President Bush: 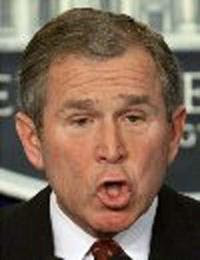 In the case of President Obama, the imagery is not so subtle, but looking at the President Bush photo, notice how the photo's point of view is much closer to the President's eye line, and also how the expressions on the faces of the two differ. You are looking up at Obama, who has a pious expression and is surrounded by a halo, while in the second photo, you are looking down at Bush, who is caught with an unflattering look on his face.

How does each picture make you feel about the subject? This is how you influence the thoughts and feelings of the viewer without that viewer even realizing that he is being manipulated.
Posted by Divemedic at 12:29 PM